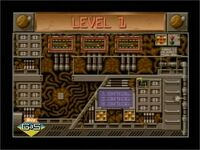 Alien Moonbase was a game level with an outer space theme.

This was set in an intergalactic mechanical building inhabited by computers and robots.

Players had to switch off three anti-matter reactors (sometimes called circuit breakers) upstairs and downstairs to go on to the next level.

The player could switch off the main computer to freeze the robots, activating the light bridge so that the second set of reactors would be able to be reached.