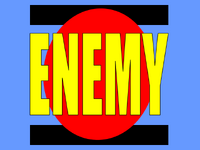 An animated enemy is a character which changed with the setting of the game board, and "attacked" Mikey, causing the team that moved Mikey that gets run over by an enemy to lose control to the opposing team. The Enemies included:

Retrieved from "https://nick-arcade.fandom.com/wiki/Enemy?oldid=4496"
Community content is available under CC-BY-SA unless otherwise noted.