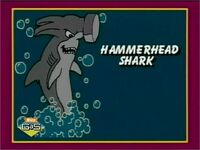 The Hammerhead Shark wass an Enemy from the Specific Ocean and sometimes in Pirate's Cove.

Mikey swam along when this fearsome shark, whose head literally resembled a hammer, appeared in a rush of bubbles. He then used his head to bash Mikey twice, flattening him into a coin with his head on it.

Retrieved from "https://nick-arcade.fandom.com/wiki/Hammerhead_Shark?oldid=4954"
Community content is available under CC-BY-SA unless otherwise noted.