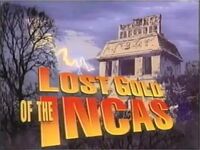 Lost Gold of the Incas is an early version of the show's Video Zone and Inca-themed game.

The winning team must collect three gold coins in each level in two minutes or less. In addition, each level contained a 'power-up' that appeared periodically that, when touched, gave the player an added advantage in that level.

Add a photo to this gallery
Retrieved from "https://nick-arcade.fandom.com/wiki/Lost_Gold_of_the_Incas?oldid=4968"
Community content is available under CC-BY-SA unless otherwise noted.