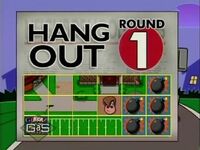 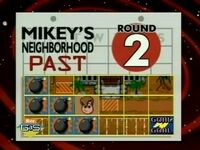 There are two rounds of game play. In each round, a cartoon mascot & video adventurer named Mikey moves all around a thematic game board (divided up into 18 squares) on the screen in every direction but not diagonally. Mikey moves by command of the controlling team. Every time Mikey lands on a new square, one of eight spaces would be revealed.

The object was to get Mikey to the Goal square. More often than not, the round would end because of time constraints. Whenever that happens, Mikey was moved directly to the goal, and a question was asked; the first team to buzz in with the correct answer received the "Goal" points.

For more information about these spaces and the different themes of each board, visit these articles:

Retrieved from "https://nick-arcade.fandom.com/wiki/Main_Rounds?oldid=4375"
Community content is available under CC-BY-SA unless otherwise noted.