Monsters on the Loose 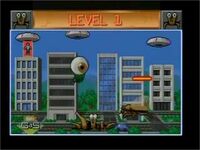 Monsters on the Loose was one of the game levels seen in season two.

A city was plagued with monsters and aliens. Worse yet, aliens in spaceships took many people back to their planet by beaming them up, and it was up to the now giant contestants to save them.

In the city, players had to save three humans to go on to the next level.

The player could touch a power rod to release cosmic radiation and wipe everything out for a limited time.