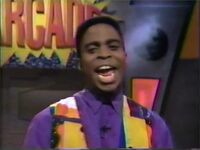 Phil Moore (born August 24, 1961 in Baltimore, Maryland) is an American actor, writer, rapper, comedian, and game show host. His most notable works were on Nickelodeon where he hosted Nick Arcade and You're On!. Moore was originally an audience warm-up man for the MTV series Remote Control. He also appeared as a panelist on Figure it Out.

Retrieved from "https://nick-arcade.fandom.com/wiki/Phil_Moore?oldid=4445"
Community content is available under CC-BY-SA unless otherwise noted.