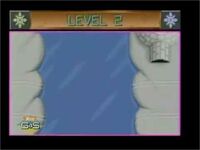 Snow Slingers was one of the season two game levels.

The player would be in a winter wonderland and in the middle of a snowball fight with several elves.

Players had to hit three annoying elves by throwing snowballs at them to go on to the Wizard Level.

The player could hit a magical snowman to make him play his fiddle and hypnotize the elves, who then stopped attacking to dance to the music for five seconds.