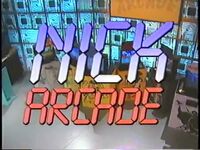 Like all TV shows, Nick Arcade started out as a pilot. Like the eventual series, it was taped at Nickelodeon Studios at Universal Studios in Orlando, Florida.

Differences Between the Pilot & Series[]

Like some TV pilots, there were differences between the pilot and what we see when it went to air.

The Face-Off works the same way except with these differences:

While the main rounds and the premise of them were the same as the series, the following differences were shown:

The bonus round worked just about the same except for the following: