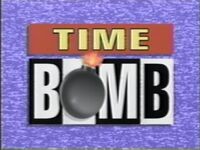 In the rare occurrence that Mikey moved to a space that had already been landed on, a "Time Bomb" would occur. The team controlling Mikey had 10 seconds to spell a word, alternating letters back and forth between team members. If a team correctly "pong-spelled" a word, they kept control; otherwise, the other team would gain control. Regardless of the outcome, no points were awarded. The "Time Bomb" occurred only on a few occasions (one episode had at least two uses of the "Time Bomb"). In an attempt to prevent this event from occurring, host Moore would dissuade teams from choosing to move to a square that had already been occupied, or simply tell the team that they could not make that move.

NOTE: In the pilot, it was just another hidden space on the board.

A playing of a Time Bomb Question

Retrieved from "https://nick-arcade.fandom.com/wiki/Time_Bomb?oldid=4874"
Community content is available under CC-BY-SA unless otherwise noted.