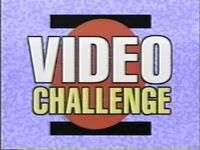 One of the contestants from a team chose one of five video games on stage to play (each of which could be played only once during an episode). The goal was to beat the "Wizard's Challenge" (renamed "Expert's Challenge" in Season 2), which was usually to achieve a certain score within 30 seconds for the game chosen. The other team member had three seconds (although it usually was not enforced) to write, using a Magna-Doodle, how much of their score they would gamble that the partner could complete the challenge. If the player met or beat the challenge, the wager was added to their score, and the team kept control of Mikey. If not, they lost the wager and the other team gained control. Teams could wager any amount from zero to their current score or the value of one question in that round if the team had less (similar to the "Daily Double" on Jeopardy!). In the event the other team member wagered more points than their current score, the wager was rounded down to their current score, only if the challenge was won. Each game could be played only once during an episode, and when it was chosen, the marquee light was turned off (though the game continued to run in attract mode). Only games with constantly visible on-screen score displays were used.

Each mock-up arcade cabinet actually had two systems inside, each powered on and playing the same game: One had the game running in its "attract" mode, and the other was cued up to and paused at the point where the producers wanted the game to begin. When a contestant chose a game, the input was simply switched onto the monitor (this action was edited out). With rare exception, the consoles' stock controllers were used for gameplay.