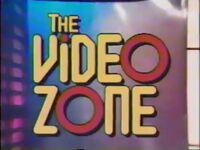 The Video Zone was actually a live-action video game with three levels. Using a video monitor to see themselves, the contestants would be backstage, climbing ladders, throwing "snowballs", and using a boat in front of a bluescreen attempting to achieve previously explained goals (which was always to obtain three objects) for each level of the game.

As in a traditional video game, players could be "damaged" by hazards and enemy characters. If they lost all of their power (five units, as shown by an on-screen gauge), they would have to start the stage over and repeat its objectives until successful (a couple of season 1 episodes had a message that said "Try again! Press "Start" to continue"). In addition, each level contained a 'power-up' that appeared periodically that, when touched, gave the player an added advantage in that level—destroying all onscreen enemies, freezing enemies for 5 seconds (rendering them harmless), restoring the team's power meter to maximum, etc.

The team had 60 seconds to clear all 3 levels (Phil refer to it as 1 minute although the on-screen in the top-right of the screen displays 60 seconds). Each item touched won the team $50 to split, and each level cleared won a prize of increasing value. Successfully beating the Game Wizard in the final level won the grand prize, which was usually a vacation. If time ran out before the team completed the game, a "laugh"-like sound played, the screen faded to red, and "GAME OVER" appeared on the screen.

Both players, sharing one energy gauge, teamed up for the last level, which was a face-off against one of three wizard-typed villains that rotated throughout the show's run.

To defeat them, the players had to touch three orbs before time expired, while trying to avoid one of the Game Wizards and the projectiles he or she was throwing, the ghostly creatures flying around the room, and the beams of lightning, fire, or energy (depending on who the Wizard was) that erupted from the ground. If either player touched a spinning hourglass that randomly appeared, all enemies and hazards would be immobilized and rendered harmless for five seconds.

Upon the Wizard's defeat (if the players succeeded), depending on who the players faced, the wizard would disappear in some way. After that, the message "You did it! You beat the game." would then flash across the screen.

In Season 1, the Wizards had nearly identical rooms (with only different color schemes depending on the Wizard). In Season 2, each Wizard was given a more unique room to better fit his/her theme, but the mechanics were the same as before.